The meanings vary over time and depend on context. This is why even intelligent people have trouble working out what politicians are actually trying to say:

For anyone that has been offended by what they have just read I suggest they refer to George Orwell’s essay: ‘Politics and the English Language’ (1946) or to ‘dog-whistle politics’ on wikipedia.

Over the last few years we have witnessed the collapse of global banks and the failure of centralised governments to spend sustainably. Part of this is due to linear thinking where, for example, toxic derivatives have been repackaged and resold without the circular consequences being considered. With linear thinking you will eventually reach the end of the line and in this case it was the credit crunch and a global realisation that the banks didn’t really know how much toxic debt they actually held. It was believed that the ‘Market’ would solve this problem. It didn’t and instead the world entered into recession as trade froze while our leaders tried to work out how to unlock the stalemate and get the economy moving again. This out of sight, out of mind approach to finance can also be seen in trade and politics where centralised systems make the cause and effect consequences unfelt until it is too late. A centralised government makes strategic decisions for a piece of land which is so big it cannot see the consequence of its actions until billions of pounds have been spent. Why does this arbitrary boundary that defines our country determine how the land is managed? How can centralised governance comprehend the complexities of society on the scale they are expected to work without making nonspecific generalisations that impact on local culture and identity? The arrival of the internet, one of the greatest inventions of our recent past, has nearly completely networked the planet. Could this technology provide a distribution of information and awareness for humanity which leads to a global Distributed Network?

The current political system is a relatively new invention. A quick history lesson shows that before 1066 England was ruled by a monarch. The feudal system introduced a debate team of tenants-in-chief from which William of Normandy would seek advice before making laws. In 1215 the tenants-in-chief secured Magna Carta from King John which established the monarch would not levy taxes without the consent of his royal council, which gradually developed into a parliament. Over time parliament limited the power of the monarch to the extent that all laws are now made by parliament and you could say that the monarch acts as an advisor to the prime minister. Realising the evolution of England’s governance is important in understanding that what exists today is not necessarily the best model to secure our future success.

Let me ask you a question. Tell me the top five policies of the three major parties in England and explain the changes to society and directly to you that having either one in power would produce? There are very few people that can answer this question. Unfortunately our hard fought democratic right to vote has become a misleading smoke-screen which has resulted in the whimsical change of government where an opposition party not only debates new laws but actively blocks good ideas to gain personal and political leverage. Does this sound constructive? Yet if we look at large companies such as Apple, that has only existed for 35years, they now have more money than the USA to spend! Is there something in the model of corporations that could be translated to the governance of countries to aid their evolution? Does society need a national voting system to relieve its frustrations or would localised share holding empower citizens to make positive changes to their communities? By making counties into corporations would people realise the pointlessness in accumulating wealth to the detriment of the community?

The Distributed Network is a proposal to devolve the structures of national governance and allow each state or county to independently manage their own finances and affairs. Each county will be managed by a CEO chosen by a board of directors and everybody within the county will be a shareholder with the power to change the board should it fail to deliver. By focusing management by county it will be easier to comprehend the complexity of the systems at work than the current system of parliament is able to achieve. It would also attract a new generation of social CEO’s who are uninspired by politics and would now have the opportunity to make a positive difference to their area. New ideas could be tested in small parts of the country and if successful would naturally spread. This would prevent the arbitrary staking of countries against one another and encourage partnerships to be formed both nationally and internationally between counties. Success could be measured by carbon usage and contentment levels rather than GDP which encourages unsustainable growth for growths sake. Each CEO has the ultimate power to make decisions for the county but the county cannot expand its boundaries nor restrict immigration. Each county would then have to chose between becoming completely self-sufficient or trading with others to find a balance. This process would also encourage cultural identity to be enhanced as each county competed with its neighbours to be the most sustainable and harmonious. The aim of the Distributed Network is to reach a sustainable balance where all systems across the globe are circular and are networked to the benefit of the county, the human species and the planet.

Winston Churchill famously said : “Democracy is the worst form of government except for all those other forms that have been tried…” Maybe there is an alternative? What do you think? 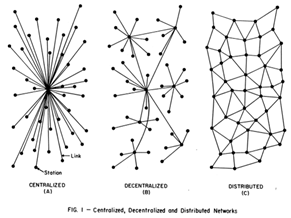